The mountain, topped by the Benedictine Abbey of Montecassino, towering high above the town of Cassino in Italy, was the linchpin of the German defensive line at the end of 1943. From January through May of 1944, the Allies tried four times to break through into the Liri valley and highway 6 that led from Cassino to Rome. 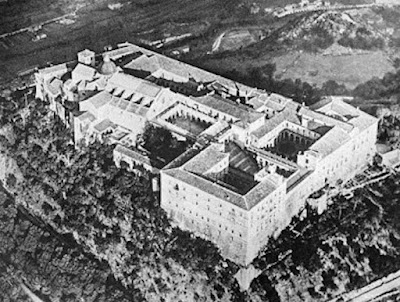 I have designed scenarios for all four of these historic battles, as participation games, in 6mm scale, using Brigadier General Commands rules.  They played successfully in October at Texas Broadsides and are on the program again at MilleniumCon in November. Montecassino will also be at OwlCon in February. 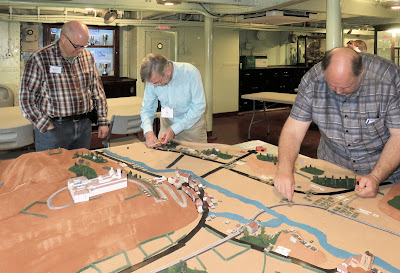 Making the terrain has been a labor of love. Carving of the mountains, sculpting the hairpin bends that wind up to the monastery, building the fort half way up that road, which the Germans have reinforced to be practically indestructible. The piece-de-resistance is the monastery, which I have both in pristine condition and wrecked by the Allied bombing.
In the first battle, U.S. 36th Texan Division (yes, we’re playing at home) attempts to take a bridgehead across the river downstream of Cassino, around the town of Sant'Angelo in Theodice. Historically, this was a disaster, inciting an investigation by Congress to establish responsibility. Crossing a rapidly flowing river in wooden assault boats, when opposed by a well-prepared enemy took courage, yet cross they did. The battle continues with a right hook by U.S. 34th Red Bull Division, aiming for the monastery. 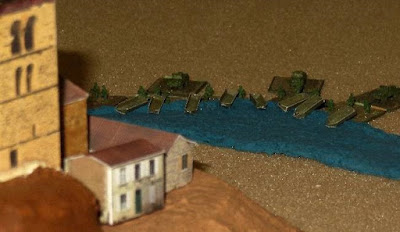 The German defense in the first battle was successfully conducted by 15 Panzer Grenadier Division. They had prepared their positions, clearing fields of fire and digging in, not to mention many concrete fortifications. For the subsequent battles the Germans brought in the elite parachute unit, 1st Fallschirm-Jäger Division and on the fringes 5th Mountain Division. These are tough nuts to crack.

Prior to the second battle, the controversial massed bombing of the monastery took place. The Germans had declared they would not occupy this historical building, but once it was in ruins, they made a fortress out of it. Now, the second attempt was made by 4th Indian Division, repeating that right hook up the mountain. 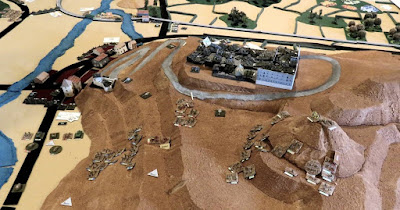 I have a personal interest in 4th Indian Division battle, as my Dad was there. It was one of the few war stories he ever told (and he told it with pride). As a Royal Artillery spotter, with his radio, he was amongst the first to reach the top of the mountain above the monastery. Although that was a dominant position from which to call in fire, they couldn’t hold it and had to fight their way out!

For the third battle, the air-force was once again called in to assist, with the bombing of Cassino town, before New Zealander Division moved in. Up on the hills, still held by 4th Indian, an ad-hoc armored column had been assembled, but this too was to no avail.

Finally, in the fourth battle, British Royal Engineers pushed Bailey Bridges across the rivers, to facilitate the thrust towards the Liri valley. Meanwhile, despite horrendous casualties, Polish 3rd and 5th Divisions, took the monastery, forcing the Germans to withdraw beyond Rome.

I hope this summary has sparked your appetite to play and see how well you fare.
Posted by Daniel T Shaw at 13:40