The next official event game of Brigadier General Commands will be at Texas Broadside 12to14 October 2018.
As we will be running the Arnhem end of Operation Market Garden, here is a reproduction of the original orders. 
To: Major-General R. E. Urquhart, DSO Commander 1 British Airborne Division, with 1 Polish Parachute Brigade under Command.
1. PRIMARY TASK
Your Primary task is to capture the ARNHEM bridges or a bridge.
2. SECONDARY TASK
Your Secondary task is to establish a sufficient bridgehead to enable the follow-up formations of 30 Corps to deploy NORTH of the NEDER RIJN.
3. THIRD TASK
During your operations immediately after the landing of the first lift, you will do all in your power to destroy the flak in the area of your DZs, LZs and ARNHEM to ensure the passage of your subsequent lifts.
4. JUNCTION POINTS
(a) In order to preserve your southern bomb line, no attempt will be made to effect a junction with 82 US Airborne Division to the SOUTH. (b) At the southernmost point you hold on the main axis of 30 Corps, whether NORTH or SOUTH of the NEDER RIJN, you will establish a liaison party who will organize the reception and pass through of the follow-up formations (most probably the Guards Armoured Division; this however, will be confirmed when known for certain). This liaison party will have full information of the enemy dispositions, your own, routes open, etc. The rank of the Officer in charge of the liaison party will be Lieut-Col or above. The time at which you are to expect Junction with 30 Corps leading troops will be notified to you from Corps Headquarters as soon as it is definitely known. This information may not be available to you until some time after you have landed.
5. 30 CORPS PLAN
30 Corps plan will be made available to you by, at the latest, Friday evening 15 September.
6. ENEMY INFORMATION
The latest Intelligence will be sent to you up to the time of take-off.
-
(Sgd) F.A.M. Browning. Lieutenant General. Commander British Airborne Corps.
13 sep 44.
HQ Airborne Troops (Main) c/o APO England 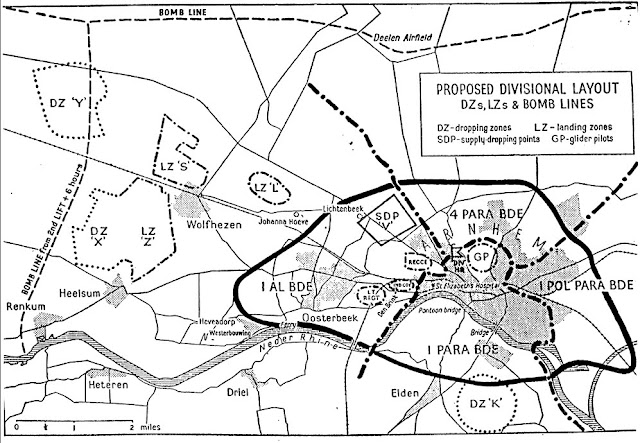